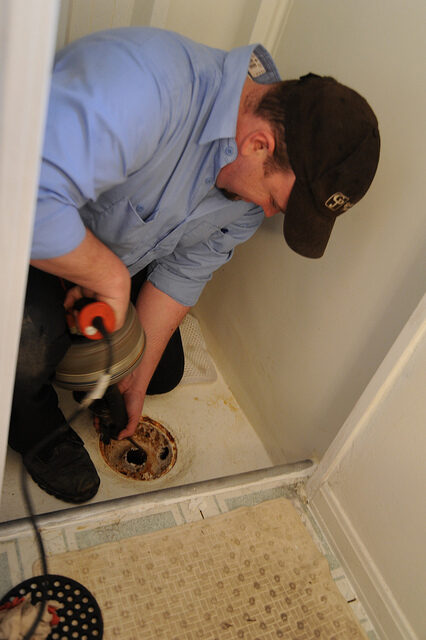 I just copied this from a friend’s page. It’s the best description I’ve seen yet.

What is a plumber?

A plumber is someone, who, like no other trades person, must know his trade along with everyone else’s. His day starts with leaving a perfectly warm bed on a bitterly cold morning, to the realization that the joints that hurt last night still hurt this morning. His best friend those morning will be the jacket one of his loved ones bought him last Christmas, and a pair of boots he hopes won’t let the water soak through before noon. Most people would think by now, that getting to the office, will be the hardest part of their day. While he ponders the most efficient way to schedule six service calls, between the time it takes his engine to warm up enough to turn the heater on. By noon, his lunch….if he has one, will be the only pause in his day, between the phone calls, from customers, friends who want to know “how to do something”, family, apprentices, who…. As he puts it “Don’t know how to do anything”, he’ll squeeze in bites of something which is now only warm at best.
The apprentice who has ridden with him this week, is seriously doubting why he made this choice. His boss can sense it, and knows he must find something to complement his “Parowan” among all the wrong things he did this week. If it were up to him he’d never have hired him in the first place, but he’s busy, and needs the help…… Although the young man can’t seem to do anything right, he remembers how his first week, month, and years were in his days and can’t help but seeing a bit of himself in the youngster. His apprentice gets up half an hour earlier, goes to bed half hour later if not more. Works twice as hard, and is the brunt of most of the jokes. His only reward, is that one day, he’ll have a good paycheck, and the reward of a job well done from the man who first put a wrench in his hand, the only person who is capable of judging his work.
When it’s almost quitting time, he’ll get another phone call, an emergency leak at someplace he’s never heard about, from a customer who thinks he charges too much, but got his number from three friends who said he does great work and he has a 4 ½ star rating. He contemplates even going, but money was tight last month and he’s got bills to pay.
His job, in a nutshell, is to bend iron, copper, steel, and reluctantly….plastic to his will. Making it hold water, gas, oil, air and human waste, with no leaks, the best possible way, with the least possible damage, at the lowest possible cost, and have it last 50 years or more. He’ll replace water heaters that are older than this last TWO cars, repair galvanized pipes that are older than he is, and fix the work of the hacks that came before him, with a gentility that most glassworkers are jealous of. He has to…..because anything that breaks after he touches those pipes is his fault in the customers eyes and that’s something that not even doctors have to live up to. He must diagnose it right the first time, have seen and know how to fix every part that ever existed, know the cause and remedy of every issue, know how to cut, know where not to cut, what to cut with and most important, not cut himself. He’ll do it with ice cold hands, because gloves take away his dexterity, something even a surgeon can admire. He’s used to doing anything with almost nothing and making it look easy. And, in a few moths he’ll do it in 115-degree heat, if he’s outside, 135 if he’s in an attic, and in the rain, in between.
There’s a reason why great plumbers charge so much, it’s a dedication to a trade that no man can master, but every plumber tries. The only legacy being, to leave behind a better plumber than existed before him, who will carry the heavy idea that “The plumber protects the health of the Nation”, one service call at a time, with workmanship that will last longer than him. No one wants to do a job like this, he knows that, and it’s not going to get cheaper. Because he, like the rest of the dirty pipe wrench turners out there know “Great plumbers are born….not made”
by Eric Ronquillo

Previous PostWho Works for Who?
Next PostJob Count is the Key